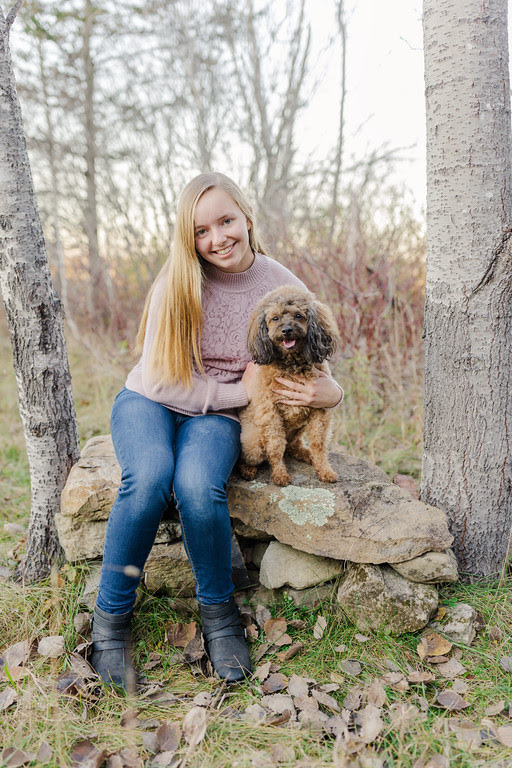 Southern Aroostook High School senior Maggie Harthorne is graduating as an early graduation candidate and will be graduating with honors. She was selected to attend the Hugh O'Brian Youth Leadership Conference in her sophomore year and was also a selected member of the Northern Maine Class D All-Star soccer team during her senior year. Additionally, she was selected to play as a flutist in the All Aroostook Music festival sixth grade through freshman year and again as a senior, during which this year she was also elected to be the high school band president.

Soccer season has been a highlight of Maggie’s year since she began playing in fifth grade. Though sad to have finished her last season, she is very grateful that music is not so easily left behind. She has played in the school band since fifth grade and will continue to play her prized flute, Kilmeny, for as long as she is able.

Maggie volunteers at the Island Falls Animal Health clinic, shadowing Dr. Ennis and helping with simple tasks one to two times per week during free periods at school. She also takes part in McGills’ Community band in Houlton and sings in the church band at Dyer Brook Community Church. Additionally, she wholeheartedly enjoys teaching a children’s class at the church.

Currently, Maggie works a few hours per week at Wind Blown Farm in Dyer Brook where she has helped with barn chores, greenhouse maintenance, and the training of a young draft horse named Fergus since eight grade. She also works after school as a veterinary assistant at the Presque Isle Animal Hospital in Houlton.

Maggie’s future plans include earning a bachelor’s degree in animal and veterinary sciences at the University of Maine in Orono before studying to be a doctor of veterinary medicine, preferably at the Atlantic Veterinary College in Prince Edward Island. As a veterinarian, she would like to service the animals of Aroostook county, treating both large animals and livestock as well as small pets. She also intends to minor in creative writing during her years of study at UMaine and for the rest of her life will continue writing as a favorite hobby.  Maggie is the daughter of Andrew and Cher Harthorne.